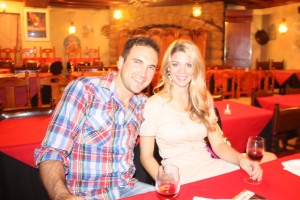 Last weekend Trav and I celebrated our 1 year anniversary.  Our plan was to go downtown for the weekend, and Travis had made a hotel reservation in Ginza.   But then Saturday morning, the day we were to leave for town, I had an abrupt reminder that it was also my 1 year anniversary of being an Air Force wife when the doorbell rang at 6 am.  Ugh.  We lay there, Travis half awake and me nudging him.

“Damn those Stars and Stripes newspaper people are persistent!” he mumbled.

“Honey, answer it.  It could be an emergency!” I mumbled back.

And turns out it was an emergency.  In Thailand.

He was expected to be on a plane by that early evening to go deliver emergency supplies that were needed from weeks of flooding.

If I’ve learned anything about being an Air Force wife yet it’s don’t make plans.  Ever. Because they will usually, undoubtedly, assuredly change.  There’s no room for sentimentality or melodrama.  Never get too excited about eating that perfectly frosted and bedazzled little cupcake because the second you do it’ll be rashly bumped out of your hands before you have a chance to take a bite.  For a career that is sort of like being on call all the time, and with him being gone about half of the time, I’ve already learned not to obsess over dates but to just have our celebratory ditties whenever he’s around.

Sure, I wanted to light somebody’s hair on fire, starting with Bryan Huffman, our good friend who had the unfortunate task of waking us up.  Bless his heart.  I could tell Trav was disappointed after planning our special weekend, but seeing his reaction reminded me of why I married him in the first place.  He’s never a whiner (Lord knows I do enough for both of us), rolls with the punches, and is always willing to serve, no matter how craptastic the scenario.  I think I speak for all military wives when I say that we married some of the best.  It sucks to see them come and go all the time, but we’re reminded that it’s those admirable qualities that attracted us to them in the first place.

So just when I had accepted that he was leaving for an indefinite period of time and I was about to cook a late lunch for us before he took off, the phone rang, and he was notified that they reduced the number of planes going and he no longer had to go to Thailand. Hurrah! Anniversary weekend was back on!

We quickly packed our bags, attempted to re-make our reservations, thoroughly confusing the Japanese receptionist on the other end with our lost-in-translation scenario (we weren’t even sure if they understood us the last time we called to cancel it) and set off for Ginza!  This was also our first time driving downtown.  Travis drove and I navigated, and we actually made it without missing a single turn~ for those of you who know us well, you understand this is a rare and miraculous happenstance, especially in a city like Tokyo.

We stayed at the snug yet chic Monterey La Soeur Hotel, coincidentally decorated with authentic 1920s fashion sketches that were reminiscent of our wedding.  Travis almost pretended like he planned it, but he knew that I knew better.  Delighted, nonetheless!

We had dinner & show reservations at El Flamenco, an authentic Spanish flamenco hall in Shinjuku, but we first wandered through Ginza for cocktail hour.  Ginza happens to be one of the ritziest neighborhoods in Tokyo, but where did we end up? Naturally, a beer hall. Then we discovered that it was actually Japan’s first beer hall–the Lion Beer Hall–built in 1934.  Old-school, Bavarian looking, and with a ‘mock gothic’ interior, it was awesome but definitely looked out-of-place next to all of the Gucci, Pucci, and other high-end retail stores on the same strip.

The flamenco show was uh-maz-ing.  I’ve been bewitched by flamenco ever since I went to Spain in 2007, and this show did not disappoint.  All of the singers, dancers and guitarists were real live Spaniards, and they heated the place up in a matter of minutes.  Forget scantily clad pop stars with cheap beats and 3 chord songs.  There are few things on this earth that are as complex, ornately rich, and passionate as Spanish flamenco music!  This was Trav’s first flamenco experience, and he too thought it was “hot”.  Add tapas and a pitcher of spicy sangria to that, I’m pretty sure our heartbeats were in-sync with the dancers’ claps.  Olé!

The next day we had coffee, stopped at the famous fish market, resisted the urge to invest in a live king-crab, and swanned around Ginza arm in arm like two Siamese space invaders.

It was the best weekend celebrating the best year of my life, and I feel truly blessed.