It’s no surprise that the Japanese love Alice in Wonderland, because you never know what rabbit hole you just might fall into when you’re out in Tokyo!  On any given day, there’s so much going on here, and this city does not lack for the wacky, absurd, and unique experiences.

We drove into town last weekend to celebrate my birthday a little late- originally we had reserved the previous weekend but we had to postpone it, naturally, because of a war simulation exercise that carved out Sunday morning.

We stayed at the Hardy Barracks (“party barracks!”), an old army establishment leftover from the occupation era.  It’s low rent, and yeah- it does look like a prison on the outside, complete with barbed-wire fencing and a drab grayish exterior, but it’s a super-cheap and decent option in a great area. 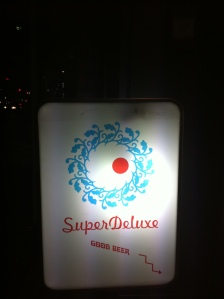 We showed up before they opened and we were asked to return later for the ‘show’- (type of show lost-in-translation; something to do with electronics.)  So after a happy hour pit stop at crossroads, a very gaijin-friendly pub  in Roppongi, and then a quick kebab (in the Middle East, we’d call it a Shawarma; it’s heaps of meat with special sauce in a pita and makes a cheap meal or fourth meal in any big, expensive city),  we went back to Super Deluxe, just in time for the ‘show’.

I’m not sure if the place is regularly super or deluxe, but on this night it was a dark room full of  punkish, artsy Japanese hipsters silhouetted against 3 giant screens, head-boppin to the beats of techno-ish trippy music and a graphics show with funky, morphing geometric shapes, lines and patterns.

They were completely entranced.  We were confused:

I think we were more entertained watching the regulars watch the show than the actual show itself.   But it was something different and their house brew Tokyo Ale and specialty beer-battered cauliflower florets (yeah, you heard me right) definitely made Super Deluxe an unforgettable place.

Later we ended up at Legends Sports Bar and watched a soccer match between Australia and Oman.  We were the only ones cheering for Oman, and though we left before it was over, turns out they actually won!  I’m not a big soccer fan, but am certainly proud of the Muscat Miracle here.  World Cup 2014?

Saturday we went to frolic in Yoyogi Park.  From the moment strolled down the forestry entry, we knew something magical was going on.  There were dozens of little girls all dressed up in their traditional geisha-esque outfits, hair did, make-up and the whole get-up.  They were so cute and doll-like, and some of them would even stop and pose for us to take pictures, as if they had gotten all gussied up for people like us to coo over them.   “What was this?”  They were wearing medals as if they’d competed in a beauty pageant.  Maybe Toddlers & Tiaras Tokyo Edition? Where was TLC hiding out?  I was certain they were in on this.

After we reached the temple, we figured out that it was some sort of religious day.  Later, a friend told me that it was “Blessing Day”.  This explains the family portraits and multiple bride & groom processionals:

Saturday night was our 29th birthday celebration with our friends at El Flamenco, my favorite new place in Shinjuku aforementioned in this blog.

We met everybody at Advocates Bar around the corner for a pre-game happy hour.  They have this incomprehensible special called “Beer Blast” which goes from 6-9 every day, 1000 yen for all you can drink Suntori draft.  1000 yen is about $12, and this will barely buy you 1 beer in Shinjuku.  The Jew in Trav loves this deal; clearly, this was the place to start.  I was aware in advance that it was a gay bar, but I didn’t think anybody would notice (or care).  I was wrong that they wouldn’t notice (errr, I failed to check out the bathroom art!) but was right that nobody cared.  Our people seemed to like it, particularly the Beer Blast.  Most of the regulars were ex-pats and friendly.  I got a special birthday song from a chipper Aussie named Phil, and hearty compliments on the men-folk.  I didn’t personally experience any social kerfluffles, but later I was told there were a few of the regulars that were a little ruffled by our large group and made some rude comments about how we needed to leave!  Okay, maybe they were understandably antsy about our group of 23 non-flirtatious straight Americans, mostly couples, who had spontaneously invaded their neighborhood bar (which is about the size of a walk-in closet plus a small patio) and taken up all the seats!  Oh well.  We’ll definitely be returning to Advocates for another Beer Blast; maybe with a smaller crowd.

Flamenco was just as bewitching the second time around, and I was delighted to see that it was the same cast but seemed to be an entirely different show.  I think a lot of the performance must be improvised.  Our group got the award for “most obnoxious”, but what do you expect from having Beer Blast right before?  Actually, we were pretty well behaved, all things considered.  We got shushed just once by a dancer, but I think they enjoyed the extra cheers and energy that we gave them.  We were so close to the stage that I think I got pelted by a few sweat drops slinging off the dancers.  Again, no pictures of the show were allowed, but we took some in our seats:

Later we ended up in Roppongi again at a salsa/merengue club called copacabana for some late night dancing before calling it a night.  Yeah, our invitation to this night boasted that we were  “29 and feeling fine”, and “still had it” but the only ones who survived past copacabana were under the age of 25.