It was the time of day in Bangkok when dirt and dust from sidewalk chalk covered my kids. With darkened faces, glowing eyes, and wild hair, they looked like creatures from another planet, doing loops on bikes in the shade of our high-rise condo.

My six year old loves riding his foot-operated dune buggy with chalk in hand, leaving behind trails of colorful string patterns that intertwine and dance around the building. He has an insatiable need to create, even when I’m only trying to get him to burn off some energy before bedtime.

I corralled them to the elevator to go home for dinner when our beloved building mechanic, Tom, walked over with his hands clasped together, hiding a surprise. He carefully opened his fingers to reveal the longest, fattest, greenest caterpillars I had ever seen. I held one in my hand and watched it wiggle its chubby legs up the leaf it was holding. It had two pale blue eyes trimmed in black that hypnotized us all. Thais call this beautiful creature the Ghost Moth. 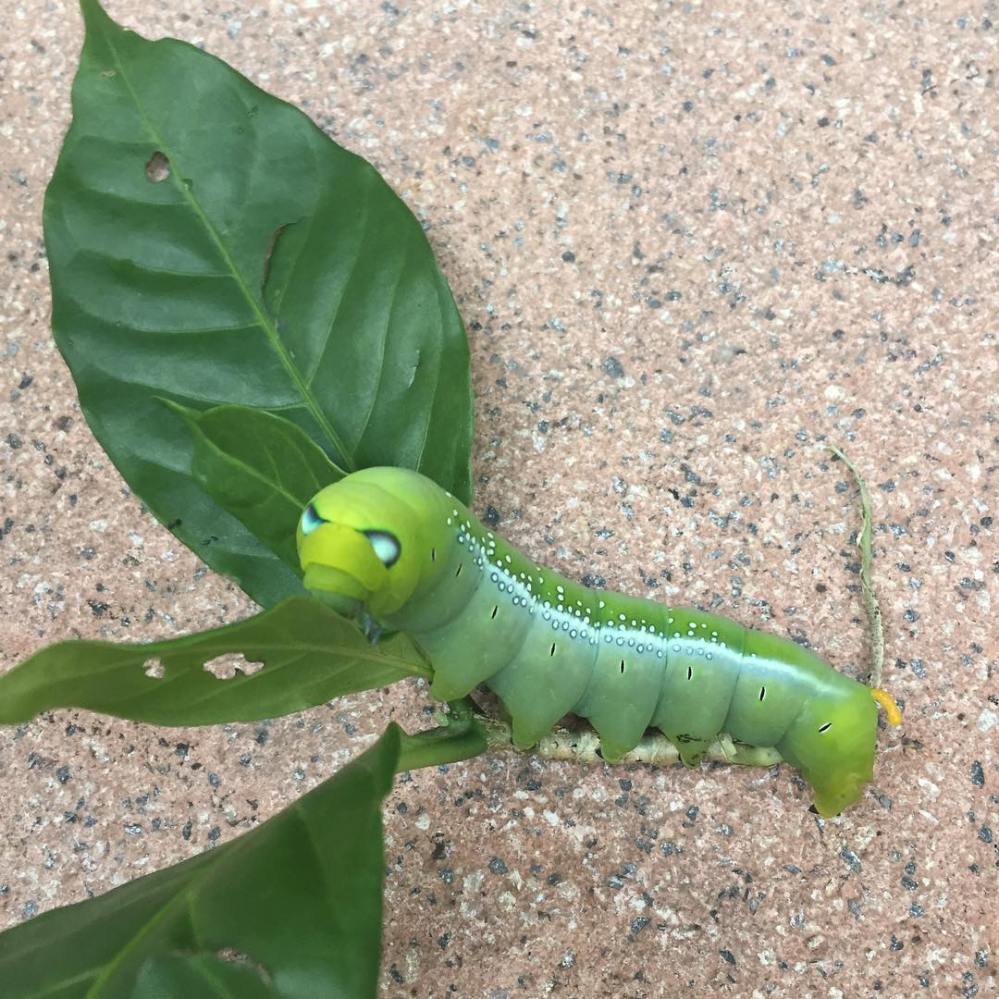 We thanked Tom and within minutes I had a pet pupa in a cardboard box under my kitchen window. It turned red and black and spun silk around itself, carrying on with its mysterious way of life despite being disconnected from the earth twenty seven-stories high. In two days, it was completely entombed in its shell cocoon, still and waiting.

My neighbor discovered on Google that it was an Oleander Hawk Moth.

“This thing has a potential wingspan of up to five inches!” she warned, handing me a mesh laundry bag to put around the box.

The thought of waking up to a giant moth in my house was frightening. But there was no turning back—it was our moth, and we belonged to each other.

Each morning I looked for signs of hatching. I was jealous of the long nap it was getting, shut off from the world inside its snug hidey-hole. The kids and I would sit and stare at it for minutes at a time, entranced by its dormant state, knowing magic was happening inside its brown shell.

My husband was away on a work trip, and I turned into Crazy Caterpillar Lady. I sat with the pupa next to me on the couch while I watched TV after the kids went to bed. On baby watch, I waited for the moment our sweet pea would make her grand debut, stretch her wings for the first time, and face the world as a new creature.

I never thought much about moths. I’m a Christian. What good were moths? I used to not think much about most people in the world, much less some lowly insect. The people where I’m from put a high emphasis on humans and their souls, but not much at all on other life forms. But living in a culture like Thailand that is rich in animistic folk beliefs, assigning spirit to plants and animals, has a way of rubbing off on you.

My kids and I were enraptured by the essence of this good little creature and the bright hope that comes with transformation.

Outside my kitchen window, I’ve watched a voguish high-rise condo going up for the past two years. In the wee hours of the morning, I get distracted by the activity while making my kids’ breakfast. The fluorescent yellow uniforms of the construction workers glow in the early morning light. Most are migrant workers from Myanmar and Cambodia. I wonder what each of them are thinking as they sit alone eating their breakfast in a shell of a room, feet dangling over a windowsill thirty stories high. Did they leave parents behind in order to make a living? Did they marvel at the shiny, gilded building and feel pride over the fruits of their labor, or did they dream of their own house they wanted to build on a plot of beautiful land they’d call home? What would the house of their dreams look like and with whom would they share it?

Watching the condo go up was a strange disrupter to my faith. I realized my former indifference to these sorts of people was nurtured by the twisted theology that stipulates unless a missionary convinced them to pray the right kind of prayer before they died, these men who toiled every day in the scorching sun of this life would only experience unquenchable flames of torment in the next. On top of that, I was told “it’s all for the glory of God.” It wasn’t hard to accept this if you didn’t live with folks assigned to this category, but now as an expatriate in Asia, I am haunted by the sheer multitude of such workers erecting buildings and stitching sneakers and painting eyeballs on baby dolls bound for America.

Early one morning I took a peek at the pupa underneath the laundry bag. I jumped and nearly threw the box when I saw two ghastly black eyes staring back at me. It was only 6:00 am, but my kids and I shuffled downstairs in our pajamas to take our moth outside. We carefully peeled the mesh bag off the box.

Shades of olive green marble elegantly swirled with a contrasting touch of pink that looked like something out of a Pucci catalogue. In the center of her wings, the pattern made a perfect face akin to a bearded goat, perhaps a creative way to scare away predators. I wanted to touch her lush and velvety wings, but held back. 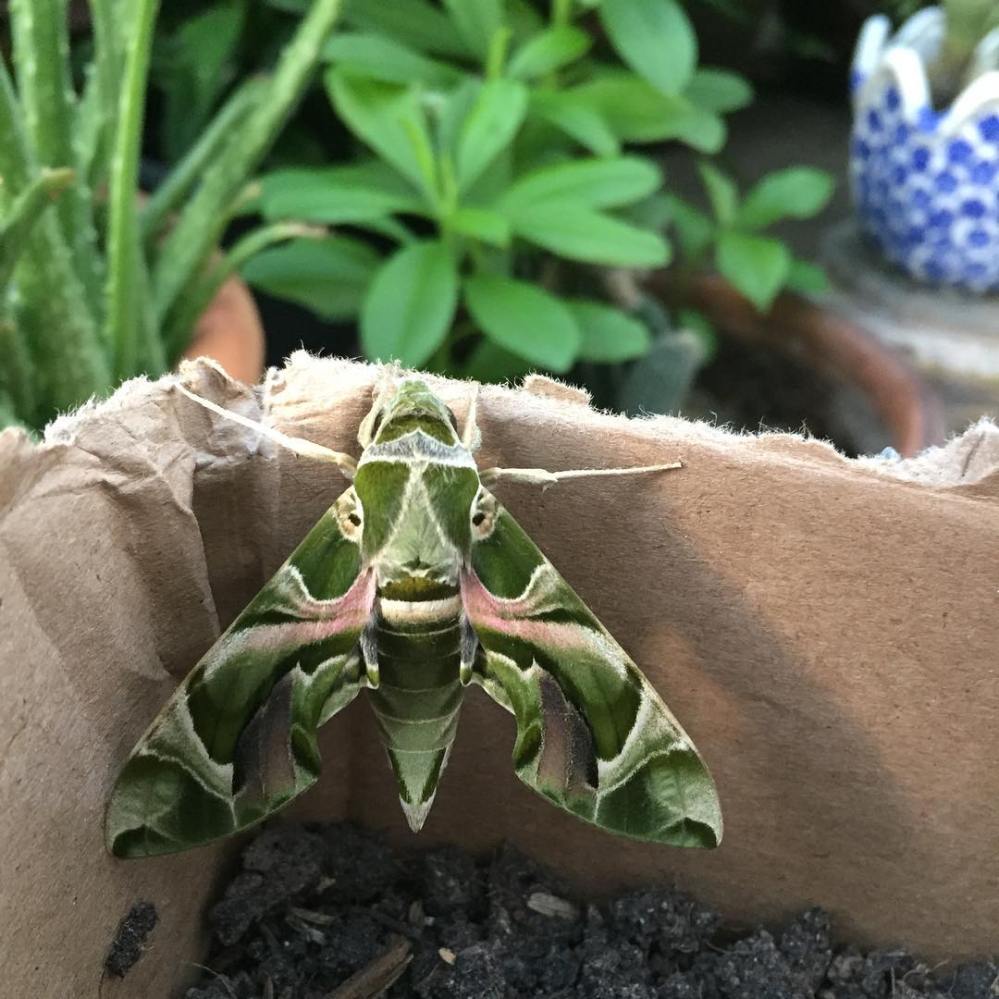 We placed her box inside the garden of potted plants on the side of the building where Tom had found her. We wondered aloud if she would remember the days of her previous life or if it was like being born the first time.

The next morning she had vanished, slipping away somewhere like a ghost, carrying with her enduring hope and beauty.

I thought about her at lunchtime while standing in line for soup on the street behind my construction worker-neighbors. Nowadays, I see them as the prologue of the Gospel of John suggests—beautiful beings of light that carry the ongoing creative force of the universe. I don’t know to whom they pray, but wasn’t their very breath a prayer bent on hope, unity, and connection? I decided that a God who made the universe but didn’t know each of those construction workers’ thoughts and sing over them, too, as children and creative heirs wasn’t worth believing in.

Doesn’t all creation have an essence of goodness longing to be released, a story yearning to be told, and a creativity longing to be expressed?

The explosion of love that birthed the universe radiates its creative energies to the
present and enfolds us all—the mountains and the forests, the dinosaurs and giant sloths, the Neanderthals and Homo Erectus, the glittering galaxies, a child’s sidewalk chalk art, an exquisite architectural design, the moth and construction worker. The creation that God called “good” still emerges day after day.